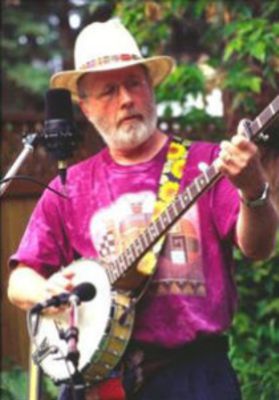 Barry Luft’s singing has woven rich, colourful threads into the fabric of folk-style music in Alberta for more than fifty years.

Barry presents Canadian, British and American songs and ballads with instrumental accompaniment or a cappella arrangements. He engages his audiences in these musical performances and gives a healthy lift to minds, hearts and voices. Good times leave good memories!

Much of Barry’s material is unusual and refreshing. It comes from sources across North America and the British Isles and is seldom known in the everyday music scene. For example, in his repertoire are songs learned first hand at guitar and music camps.

A variety of instruments perks up Barry’s performances and his intricate style on the five-string banjo is his trademark. He was taught at age five to play the harmonica by his dad. Other instruments now include guitar, autoharp, English concertina, and Appalachian dulcimer. However, to this day, Barry claims he’s not able to read music well enough to hurt his playing.